The following information is based on extracts taken from ‘A History of Kangaroo island Schools 1839 to 1980’, a book researched and compiled by Leonie Bell and Faye Davidson for the Kangaroo Island Welfare Clubs Association, October 1981.

The first school in Kingscote can claim the honour of being the first in South Australia . It was an open air school conducted by Captain Walter Bromley, a former army officer, who arrived at Nepean Bay in November 1836. Captain Bromley, an unsalaried agent of the British and Foreign Bible Society, taught twenty children at Reeves point, Kingscote, from November 1836 until May 1837, when he left to take up a position as Protector of Aborigines. The parents paid a penny a day for lessons which were held in the shade of a large tree.

Records of early schooling on Kangaroo Island are very sketchy. There appears to have been a series of schools at Queenscliffe (Kingscote) which were opened and closed up until 1884, when the Education Department set up a stable school.

In 1907, Mr Arthur Daw offered the South Australian Government a half acre block in Franklin Street for a new school and teacher’s residence. The building material for the new school and residence was brought to the island by the ketch ‘Oscar Robinson’ in August of 1907. Work began and two months later, in October 1909, the foundation stone was laid by Mrs Arthur Daw. The new school was ready for use at the beginning of the year 1910. At last the Kingscote School had a permanent home. The first head teacher was Herbert Rofe.

In May 1943, delegates from Kingscote, Cygnet River , Shoal Bay and Wisanger schools met to discuss the possibility of an Area School for Kingscote. A combined committee was formed and a petition was sent to the Education Department. After a time the proposal was accepted and two years later, work had begun on a new school in Centenary Avenue.

In 1946, the Area School was ready for use. The three small outback schools had closed, and the children from these travelled to Kingscote each day on two school buses, one from Cygnet River area and the other from Wisanger. The new school was officially opened by Sir Herbert Hudd, MP, on 2 nd May 1946. Mr H.L.Townsend was the Headmaster.

The infant classes were still at the old school in Franklin Street and in 1947, more rooms were added and all classes were then accommodated at the Kingscote Area School . School colours of bottle green and gold were selected – a green tunic and blaze for winter, green dress, and gold piping and buttons for summer. The sports tunic was green with two gold bands and a gold blouse.

A spate of events in 1949 made it a busy and exciting year. The Leaving Course was introduced. The first sports day was held and an interstate football match was played. A school badge was designed, and the school motto became ‘Opportunity and Service’. A prefect system was introduced.

The 1950s were years of considerable expansion. Additional classrooms were built and in 1952, students from American River School , which had closed the previous year, joined the school, swelling the enrolment to 250 with a staff of 10. By 1960, the enrolment was just under 400.

In 1965 the Headmaster, Mr Keith Biele, the longest serving Principal at Kingscote (1958 to 1969) encouraged the school committee to make an application for a replacement school. The area school had been built when war time shortages and restrictions were still in place. Some of the classrooms had come from mainland sites, so it was inevitable that the school would show signs of premature aging.

Little progress was made until 1971 when the Department accepted in principle a suggestion put forward by the then headmaster, Mr Harry Harriss, that a master plan for the long-term development of KAS be drawn up. A dental clinic was opened, which is a great benefit to the Island ‘s school children.

As the seventies progressed the state of the school buildings deteriorated alarmingly. After the achievement of 1971, there were six frustrating years of visits by officials, sketches, plans and progress reports. Hopes see-sawed between optimism and despair.

Negotiations went on until July 1977 when final plans were approved for all buildings to be replaced other than the art and craft unit, general-purpose room, woodwork and change rooms. The green light was given for a new school of Demac construction, a flexible design, completely refurbished with extensive grounds works and landscaping, at a cost of nearly $2 million. 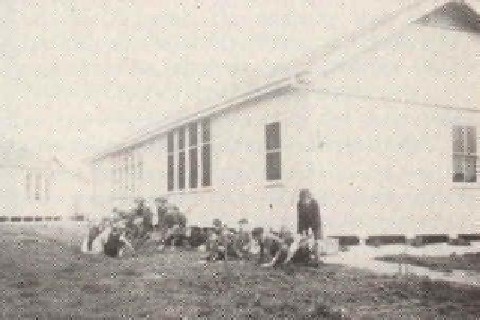 The last new unit was handed over on the 3 rd October 1978. Landscaping was completed by March 1979. The new school buildings were officially opened on 11 th October 1979 by the Director-General of Education, Mr JR Stienle. The Principal then was Mr Malcolm Bormann. Upon opening, the school had 440 students, of which 293 were primary and 147 secondary students. There were 30 teachers and 7 ancillary staff.

In recent years, the school has seen many developments, particularly in the area of computing technology. Today most of the school is linked by computers to facilitate administration and communication within the school. The library cataloguing and loans system is computerised and students have access to a wide range of information through electronic information transfer facilities.

Students also have many courses to choose from, many made available through electronic classroom facilities in a well-equipped computer suite. Senior students are able to study courses not offered face to face through the Open Access College , and the Video Link System supplied for use by TAFE students, who also use the school’s facilities. The local radio station, KKIFM operates from the school’s media suites.

After a fire in 1980, the Home Economics block was destroyed, so other rooms were converted for Home Economics use and the Community and Education Department jointly built the current Recreation Centre.

In May 1996, the school celebrated its Jubilee, which provided an opportunity for old scholars and members of the community to visit the school site and recall the past. From that event, the school was awarded the community ‘Event of the Year’ as it brought so many people back to Kingscote to share their pride in the school’s long history.